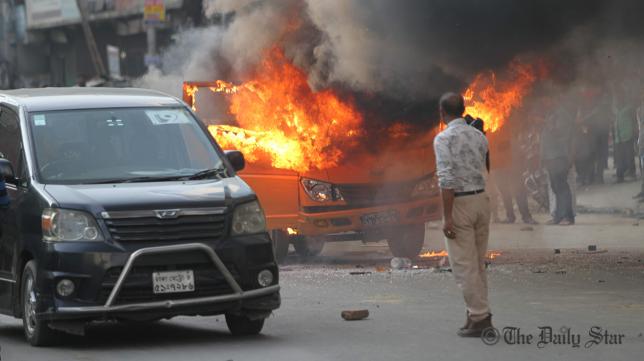 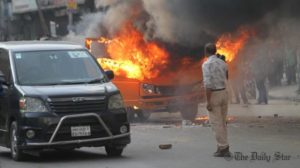 For the second time this month, Asol BNP, literally meaning real BNP, made an attempt on BNP headquarters at Nayapaltan in Dhaka today and failed.

They were met with aggravated and stick-wielding activists of Jatiyatabadi Chhatra Dal, who alleged that it was all a conspiracy of the government to split BNP.

About a dozen ‘Asol BNP’ men, led by their chief Kamrul Hasan Nasim, drove near the BNP office on a pick-up van with loudspeakers playing slogans: “Bangabandhu is the father of our nation but we need a Ziaur Rahman” around 3:40pm.

Yards away from the office, Chhatra Dal and BNP activists charged at them with sticks and drove them away. The vehicle was set on fire and the incident was followed by a flash pro-BNP procession.

“It is all a conspiracy of the government to split BNP,” alleged Mohammad Masud, vice-president of the party’s student front Chhatra Dal.

Earlier on January 2, a similar situation arose near the Nayapaltan office when about 100 supporters of the so-called Asol BNP tried to occupy the office and had to retreat without success.

Next articleWhat’s going on with the BNP? Previous articleWhy will you come to K H N school?