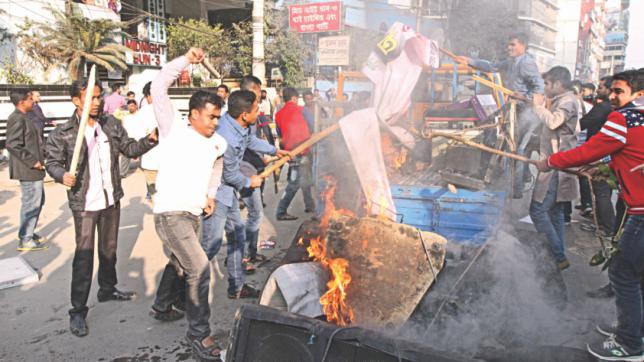 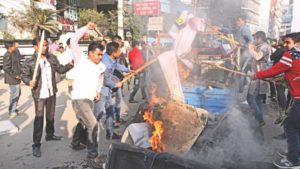 Some people under the banner of “Asol BNP” (literally real BNP) yesterday made an abortive attempt to enter the Naya Paltan central office of the BNP, the second such incident this month.

The group of around ten men was chased away by BNP activists as it closed in on the office after starting from Bijoynagar Nightingale intersection around 3:40pm.

The ‘Asol BNP’ activists were carrying a banner with “Showdown of Revolution” written on it. They also had a mini pick-up carrying loudspeakers that were playing recitation of poems written by Kamrul Hasan Nasim, convener of the so-called Asol BNP, witnesses said.

But they took to their heels the moment activists of the BNP and their student wing, Jatiyatabadi Chhatra Dal, chased them with sticks in hand.

The BNP men later vandalised the loudspeakers and torched the pick-up. They also staged demonstrations there, chanting anti-government slogans.

BNP Joint Secretary General Rizvi Ahmed at a briefing around 5:00pm said, “It [Asol BNP] is nothing but part of an evil design of the government to split the BNP.”

On January 2, a clash broke out with the BNP activists after some 100 “Asol BNP” men made an unsuccessful attempt to occupy the office.

Nasim came in the spotlight when he on January 9 last year alleged that the leadership of Khaleda Zia and her son Tarique Rahman in the BNP was “illegal”.

The “Asol BNP” convener, who claims to be a member of pro-BNP Jatiyatabadi Krishak Dal in Jessore’s Chowgachha, says he wants to occupy the BNP central office to implement his plan to “reform and reorganise” the BNP.

Talking to The Daily Star yesterday, Nasim said he would make fresh attempts “any moment” to take over the office.

About Nasim, Rizvi at the press conference said, “He is just a street boy. He has gone mad. Who is he to demand such reforms in the BNP? He actually is a government agent.”