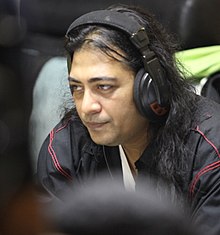 From Wikipedia, the free encyclopedia
Kamrul Hasan Nasim at his office
Born
Nasim

Kamrul Hasan Nasim is a Bangladeshi politician.[1] He is the chief editor of pioneer Bangladeshi sports magazine named kriralok.[2]

Kamrul Hasan Nasim is a journalist. His is the presenter of two popular Bangladeshi TV programs named SA TV’s Gonosharthe Jononeta and Islamic TV’ Lal Sobujer Bangladesh. He was the Special Editor of a Bangladeshi newspaper named The Daily Amader Arthonity from 2012 to 2013. Currently he is the chief editor of popular Bangladeshi sports magazine Kriralok.[3]

Kamrul hasan nasim joined Bangladesh nationalist party-BNP as a general member in 2003, when this party leaded 4 party alliance was in power. Then after he became the executive member of Krishok Dol an associated organization of BNP. After that, he selected as the general secretary of nationalist businessmen forum. In 9 January 2015 he back to Bangladesh politics and announced the reformation of Bangladesh Nationalist Party – BNP and came to spotlight again.[5][6]

Next articleLilith: A film on the Planet Previous articleOver a dozen injured in ‘Ashol BNP’ attack on BNP office