Kamrul Hasan Nasim who introduced him as initiator of reorganising the Bangladesh Nationalist Party on Saturday proposed formation of a 31-member interim government with ruling and opposition party leaders and civil society members for holding the 11th parliamentary polls. 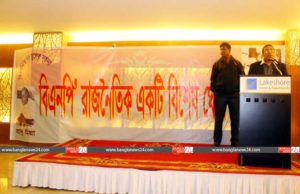 He announced it at a press conference at Westin Hotel in Dhaka on different issues, including interim government, national election, national unity, nationality, constitution, reorganisation of BNP and open letter to the prime minister.

Kamrul, who appeared in 2015 with an initiative to reform BNP naming it Asol (real) BNP, said that he did not talk to people he named for the interim government.

He claimed that about 320 leaders of BNP of 300 parliamentary constituencies were ready to accept his ‘philosophy’, saying they wanted to see a functional parliament.

Kamrul said that there was no need to resist the general election warning that none would be allowed to take oath if the election was not fair.

Kamrul said that no more ‘act of sabotage’ could be committed at the directive of BNP acting chairman Tarique Rahman, saying if he did not return home by September 30 then he should not think about the party.