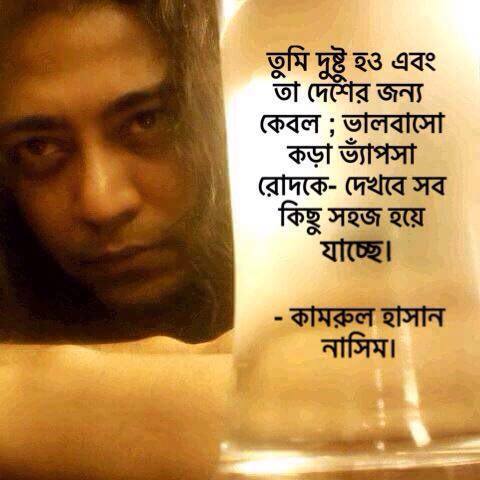 Is this a political platform for the reformists or a fresh effort to split BNP? Or is this the government’s B-Team? PROBE looks into Gorbo Bangladesh….

Gorbo Bangladesh, ostensibly a social organisation, hosted an iftar on August 27 at the Banani field in the city. Sitting on the dais were Mahi B Chowdhury, JP leader Sadek Siddiqui, Professor Dr. Shaheda, JSD (Rab) leader Abdul Malek Ratan, Islamic TV’s Director Mahmudur Rahman and sports personality Kaiser Hamid. In a break away from the norm, the programme had no chief guest. Instead, a chair placed in the middle of these persons on dais remained empty with a notice on the back: “Waiting for a qualified leader.” A similar message ran on the banner behind them: “In search of a qualified leader.”

Who are the initiators of this Gorbo Bangladesh? What are their aims and objectives? What do they mean by “qualified leader?” Is this a precursor to a political platform? The organisation’s Convenor Prof. Dr. Shaheda speaks readily to PROBE on these issues. Incidentally, she is the wife of late BNP leader KM Obaidur Rahman.

She says, the present Member Secretary of Gorbo Bangladesh Kamrul Hasan Nasim had been working over the past two or three years with the hardworking people at the grassroots. Our main aim is to raise public awareness for qualitative change in the social, political and economic arenas.  On March 3 we held a press conference at Dhaka Reporters Unity to launch our platform.

Kamrul Hasan Nasim of Chuadanga was involved in JSD politics as a student, but later became a central committee member of BNP’s front organisation Krishak Dal. He also ran a programme ‘Lal Sabujer Bangladesh’ on Islamic Television. He was involved in import and export business for some time but now is a full-timer with Gorbo Bangladesh.

Prof. Shaheda claims that several leaders of 14 major and minor political parties are with her in this initiative, both overtly and covertly.

Gorbo Bangladesh has published a four-page brochure. It lists the qualities needed for a qualified leader as well as the aims and objectives of the organisation along with its organogram. Along with the 101-member central committee, it has names of 15 affiliated bodies. The names of these front organisations are unique. The youth front is named Tarunyer Joy (Victory of the Youth); the student front is Amra Chhatra (We are Students); the women’s organisation is Aanchal (the end of the sari); the professionals’ front is Jiban Juddho (Life’s Struggle); the farmers’ front is Krishaker Hashi (The Farmer’s Smile); the religious front Manobotar Sanglap (Dialogue of Humanity), and so on.

Professor Shaheda says, presently work is on at building up the organisation countrywide and the response is overwhelming. They are planning a grand rally at the Paltan Maidan in Dhaka shortly.

Such organisation needs significant funds. Says Prof. Shaheda, “For the time being we are funding the programmes from our own pockets.” She stresses, “This is no NGO so we have no donors. We have no wish to take funds from donors because we will not be dictated by anyone.” 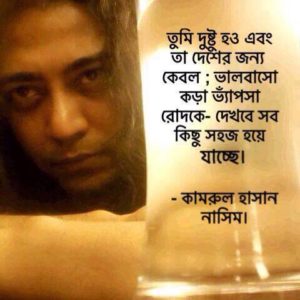 Prof. Shaheda sternly criticises Awami League, BNP, Sheikh Hasina and Begum Khaleda Zia. What type of leader does she look for? She replies, “A leader with integrity, merit, farsightedness, patriotism and character. These five qualities are a must. None of the leaders of the ruling party and the opposition have these qualities, not even Hasina or Khaleda.”

She goes on to say, “Sheikh Mujibur Rahman was a bold leader, Ziaur Rahman had integrity and in some aspects, Ershad had a modern vision. But their journey forward seems to have got stuck in a traffic jam.”

“There has been so-called democracy since 1991. Then political blunders brought us to 1/11. The politicians are responsible for this. The people welcomed 1/11, but that does not mean anyone wanted military rule. Moeen Uddin and Fakhruddin did not keep their commitment. They failed.”

As for Hasina and Khaleda, both of them have ‘inherited’ their political leadership. They have none of the five qualities for which we are searching. If they did a U Turn and took on these five qualities, we would accept that. But we have seen them for the last 30 years. They have been failures. The present government is 90% a failure. When a government is a failure, the opposition’s responsibility is doubled. But the opposition here is virtually non-existent. Khaleda Zia is busy with the claim on her house and with Koko’s parole. This cannot be the role of a national leader. The opposition is actually the 15 crore people of the country. They will select the nation’s leadership. They simply need to be made aware and that is the role of Gorbo Bangladesh.

Prof. Shaheda does not want to follow in the footsteps of Hasina and Khaleda’s trend of dynastic politics. That is why she had dropped ‘Obaid’ from her name. She was previously known as Shaheda Obaid. She says, “Obaid sahib’s chapter is over. He is no longer living. I do not want anyone saying I am in politics through my husband and so I now use the name Prof. Dr. Shaheda in taking my vision forward.”

She says, “I may have sought BNP’s nomination, but I was never really in BNP’s politics. I was never a member of the party. I even resigned from the office of NAEM DG during the rule of the alliance government.”

As for her daughter Shama Obaid’s involvement in BNP politics, she says, “She is free to do what she wants. It is up to her to practice whatever politics she wants.”

Dr. Shaheda feels that while dynastic politics is a reality and cannot be ruled out, it is not enough for Joy to be Sheikh Mujibur Rahman’s grandson or Tarique to be Ziaur Rahman’s son. They will have to prove themselves before taking on leadership. She says, “Joy has married abroad. We must remember, Sonia Gandhi has been living in India for 60 years but still could not become Prime Minister. There are thousands of young men and women like Joy and Tarique in the country. We will find the ones among them who are honest, qualified, farsighted patriotic and persons of character.”

She continues, “Sheikh Mujib was born in a very ordinary family but became a national leader. Captain Zia became a leader out of his own qualities. So it will not be hard to find a qualified leader. Such a leader will emerge from among us.”

Is she herself a qualified leader? She says, “It is not for me to say. If the common people say so, then it is possible. The people are seething with anger within but have no one to protest on their behalf. There is no one to speak the truth. I have taken this risk.”

In reply to another question she says, “I am not anti-Jamaat, but I do want the trial of the war criminals. After all, they do not accept the very existence of the country.”

The initiators of Gorbo Bangladesh have close ties with the parties and politicians who took up reformist roles after 1/11. It is apparently from the planning of the organisation and the statement of its leaders that it has all plans to launch itself as a political party in the future.

Analysts say that there are certain quarters who are endeavouring to remove Ziaur Rahman’s family from BNP. Within BNP there are some who even look to Prof. Shaheda to stand up against Begum Zia. This move may be joined by the followers of the late Abdul Mannan Bhuiyan. If these speculations have any truth in them, then Gorbo Bangladesh may emerge as the government’s B Team in the days ahead. Or is some real change coming up? Only time can say.

[Disclaimer: ALOCHONA Management is not liable for information contained in this message. The author takes full responsibility.]
To unsubscribe/subscribe, send request to alochona-owner@egroups.com