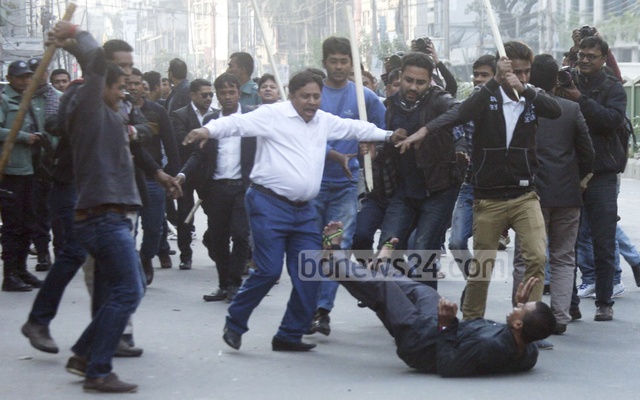 A group of people under the banner of ‘Ashol BNP’ have attacked BNP headquarters at Dhaka’s Naya Paltan, leaving over a dozen of its leaders and activists injured, the party has alleged. 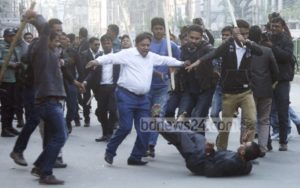 BNP Joint Secretary General Ruhul Kabir Rizvi told a hurriedly convened press conference on Saturday evening that the people, marching from Fakirapool under the banner of “Ashol BNP” (original BNP) under police guard, launched the attack in the afternoon.

“14/15 leaders and activists of Jubo Dal, Swechchhasebok Dal and Chhatra Dal have been injured in the attack. Several journalists who were in front of the office have also been hurt,” he said.Rizvi said several of the injured had been admitted to Islami Bank Hospital.

Police denied the attack under their guard.

Paltan Police Inspector Tofail told bdnews24.com, “There was a brawl between two groups of the BNP. We’ve brought the situation under control. Four have been arrested from the scene.”

According to witnesses, over a hundred people under the leadership of one Kamrul Hasan Nasim, wielding sticks and cricket stumps and chanting slogans of ‘Zia Zindabad (long live Zia) and ‘Asol BNP Zindabad’, marched towards the BNP office.

Nasim left the procession halfway but the others kept advancing, they said, adding that Chhatra Dal leaders and activists started a commotion when the procession arrived at the BNP headquarters.

The two sides then locked in a clash in front of the BNP office.

The ‘Ashol BNP’ men were dispersed when police swung into action and fired several shots in the air.

Kamrul Hasan Nasim is the self-proclaimed leader of ‘Asol BNP’. He had made headlines by organising several programmes under the banner of Asol BNP before.

At the press conference, Rizvi accused the government of being behind the attack.

“They hired unknown street urchins under the banner of ‘Asol BNP’ to launch the attack on our office. Their aim is to distract the people from the vote rigging in municipal polls and the BNP rally at Suhrawardy Udyan on Jan 5,” he said.

“The ruling party might have been behind it because the procession was under police guard. We can guess the reasons behind the attack,” he said.

“This attack under the protection of the administration is loathsome. It cannot be accepted,” he said.